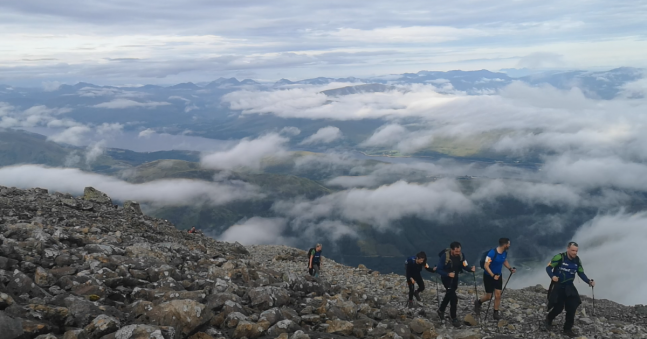 Katy, our Marketing Officer, recently took on The Three Peaks Challenge – conquering the highest peaks in Scotland, England and Wales directly after one another.

It was an incredible, but challenging, experience as the group battled extreme weather on their charity challenge. Here’s what Katy learnt from the experience and some top tips for taking on the National Three Peaks!

TOP 10 THINGS I LEARNT FROM THE THREE PEAKS CHALLENGE

Having climbed to the summit of Kilimanjaro and completing the Inca Trail Trek – I thought the Three Peaks Challenge would be a breeze. How wrong was I! Climbing three mountains straight after one another, is a challenge that shouldn’t be taken lightly.

The challenge involves trekking over 22 miles, ascending (and descending!) 3412m, with little sleep and all at a relatively quick pace. The Three Peaks Challenge is just that – a challenge! Achievable as long as you put in the correct training and preparation.

2. THE WEATHER CAN CHANGE DRAMATICALLY

Taking on the challenge in August, we were all hoping for some decent weather. We were very lucky on Ben Nevis – the weather was beautiful! The clouds lifted as we reached the summit to reveal panoramic views of the Scottish Highlands. The weather remained this way during our descent and for the majority of our drive south through Scotland – which perhaps gave us a false sense of security for the challenge ahead!

We then reached Cumbria, where the heavens opened and the winds picked up. On arrival at the base of Scafell Pike it was time to put on our waterproofs, layer up and battle the elements. It was tough. We were soaked through and exhausted from fighting the wind. Who would have thought that earlier in the same day we would be wearing t-shirts and sun cream at the top of Ben Nevis!

By the time we reached Snowdon, the weather had calmed down slightly. It was still raining – but nothing compared to Scafell Pike, so we weren’t complaining. On the way to the summit, we were hit by the cold weather and the bitter wind – with a chill factor of around 2°C. We wrapped ourselves up in hats and gloves, and upon reaching the summit enjoyed a much-needed cup of tea from the Snowdon Café!

So whatever time of year you go – make sure you pack extra layers and waterproofs and keep an eye on the weather forecast. You never know what the weather might bring!

3. TRAINING IS SO IMPORTANT

Our Three Peaks Challenge is rated as Extreme (3/3) and shouldn’t be taken on without the correct training beforehand. And the best type of training? Hiking!

I went on regular walks before taking on The Three Peaks Challenge, around my local area and further afield – including a trip up Snowdon. I also made sure I went to the gym regularly, to increase my strength and muscular endurance. I’m so glad I put in the miles before the challenge as it gave me chance to enjoy the experience a whole lot more!

Top Tip – Grab your friends and family to join you on your training walks. It’s the perfect excuse to get together and go and enjoy the great outdoors!

4. THE UK IS FULL OF BEAUTIFUL COUNTRYSIDE

The Three Peaks Challenge takes you on a journey to some of the UK’s most stunning locations! Starting with the drive from Glasgow to Fort William – the views as we passed Loch Lomond and through the mountains of Glen Coe were truly stunning! Then as the clouds parted during our Ben Nevis ascent, we were treated to incredible views of the surrounding Munros and mist covered hills. It was magical.

The drive to the start of Scafell Pike was just as picturesque, as we journeyed through the rolling hills and country lanes of the Lake District. Despite the weather, it was still possible to appreciate the rugged peaks and tranquil lakes surrounding us as we climbed England’s highest mountain. The view of Wastwater; the deepest lake in England, was second to none and a perfect distraction from the terrible weather and steep inclines ahead of us!

As we approached Snowdonia just after sunrise, we had chance to appreciate the impressive scenery of Snowdonia National Park. Upon ascending Snowdon via the Pyg Track, we were treated to views of Llyn Llydaw below and the impressive Crib Goch ridge, disappearing into the clouds above. Unfortunately, due to the weather, we were unable to admire the views from the summit of Snowdon. However, having previously climbed Snowdon in better conditions I know just how breathtaking these views can be; offering views of Snowdonia, Anglesey and even as far out as Ireland!

I soon realised hydration was so important during the challenge. I drank 2-3 litres of water per mountain, as well as a litre during each transfer. However, due to the sunshine and heat during our Ben Nevis climb, I soon became dehydrated. Between Ben Nevis and Scafell Pike I took on extra fluids, including an electrolyte drink to make sure I was fighting fit for the second peak!

Top Tip – I used a hydration bladder throughout the challenge – which meant I could drink on the move, something that I would definitely recommend!

6. MAKE SURE YOU HAVE THE CORRECT KIT

It’s so important to make sure you are prepared for the Three Peaks Challenge! As I’ve already mentioned, the weather can dramatically change from the base to the summit of each mountain as well as from peak to peak – so layers and waterproofs are vital! I didn’t think I’d need hats and gloves in August, but I absolutely did!

Global Adventure Challenges provide all participants with a kit list, including items such as walking boots, waterproofs, a 25-litre rucksack and emergency kit items. Our Event Manager made sure we all had the mandatory items before taking on the challenge.

Top Tip – One thing that really helped my experience was to pack two sets of spare hiking clothes (including fresh socks), in separate plastic bags, to quickly get changed into at the bottom of each mountain. This meant I wasn’t wearing any wet clothes for longer than necessary and I was fully prepared for the next climb!

Top Tip – Make sure you train in the kit you are going to use on the mountains! Don’t buy walking boots the week leading up to the challenge (Someone in our group did this, and had massive blisters to show for it!).

7. IT’S ALL ABOUT THE SNACKS

You’ll need to make sure you are fully fuelled for the challenge ahead! I found eating little and often worked well for me – I came prepared with lots of snacks such as protein bars, fruit, nuts, cereal bars, flapjacks and oatcakes etc.

Our Event Team also provided us with snacks before and after each mountain. It’s so important to make sure we had enough energy for each summit – so eating high energy meals, such as pasta or porridge, in between the mountains worked a treat!

One thing I learnt whilst doing the Three Peaks is that it’s important to take on the challenge as a team. It really helped motivation levels chatting away to fellow challengers, supporting each other when times got tough and celebrating our achievements together once we had completed the challenge! You get to know each other very quickly on a charity challenge like this, and it’s important to be able to rely on each other for a morale boost every now and again!

Top Tip – If you’re taking on our Three Peaks Challenge then make sure you join your unique Facebook Group, where you can get chatting to your fellow challengers before the event!

9. TRY TO GET AS MUCH SLEEP AS POSSIBLE

One of the hardest aspects of the challenge was the lack of sleep – the Three Peaks Challenge is as much of a mental challenge as a physical one. In between each mountain we jumped straight into the mini bus and drove to our next peak. This was the only time we could get some rest before we started walking again – and this sleep was definitely needed to refuel our bodies.

It’s important to prepare for the sleeping conditions as best as you can. I took a travel pillow and blanket with me to make sure I could get some rest. Others brought eye masks and earplugs, which blocked out any distractions from the journey.

Top Tip – Bring some home comforts (such as slipper socks) with you to make the journey as comfortable as possible!

One thing our guides kept reminding us was to take nothing but photos and leave nothing but footprints. The Three Peaks Challenge is very popular, with approximately 30,000 people taking on the challenge every year (never mind the thousands of tourists who take on each peak individually every year too!).

In order to maintain the mountains and keep them litter free, it’s important to ensure we take away all of our litter – including banana skins or apple cores, which can take years to decompose at altitude!

Top Tip – Take a small rubbish bag with you to put any sweet wrappers, fruit peels or tissues in.

“It’s not the mountain we conquer, but ourselves”

If you’re looking to complete the National Three Peaks and climb Ben Nevis, Scafell Pike and Snowdon then give us a call on 01244 676454 and we’ll help you start your adventure today!