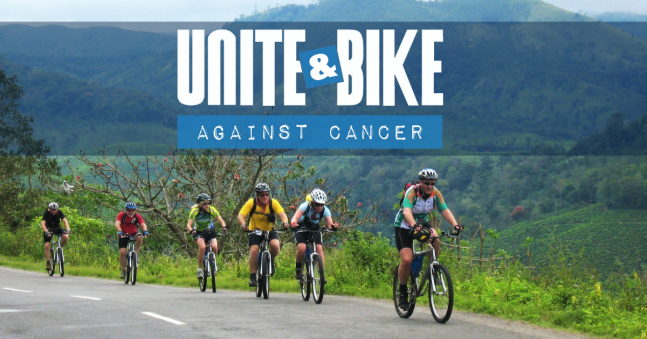 Unite and Bike Against Cancer, The Story So Far

Unite & Bike Against Cancer is an exciting cycling challenge series – in support of cancer charities nationwide. The aim of Unite & Bike Against Cancer is to give you the opportunity to support the cancer charity of your choice, take on a unique cycling adventure and have the chance to meet likeminded individuals. It’s time to UNITE and bike against cancer!

Over the years we’ve adventured to Tanzania, cycled through Cuba and even discovered the wonders of the Grand Canyon National Park – and now it’s time to take Unite & Bike Against Cancer to the picturesque region of Kerala, India.

Here’s our Unite & Bike Against Cancer story so far …

Our first ever Unite & Bike against Cancer adventure took place back in 2014. The challenge saw us cycle from the majestic slopes of Mount Kilimanjaro to the jaw dropping Ngorongoro Crater reserve. Highlights along the route included amazing views of both Kilimanjaro and Mount Meru, riding through traditional Masaai Villages and the chance to witness some incredible wildlife!

This spectacular 350km cycle challenge was so popular that we ended up adding a second Unite & Bike challenge date in 2014, and then made this route part of our open challenger calendar. Our Cycle Africa challenge is still a highly popular event – and it’s easy to see why!

Unite & Bike against Cancer then returned in 2015 – and this time we headed to the Caribbean island of Cuba! The challenge was to cycle 360km from the salsa dancing streets of Havana to the shimmering coast of the Caribbean Sea!

Picturesque coastlines, thriving farming communities and colourful buildings were just some of the incredible sights we witnessed along the way! Again, our Unite & Bike Against Cancer – Cuba challenge was so popular that Cycle Cuba was born and is now a popular challenge on our open event calendar!

The third destination of our Unite & Bike Against Cancer series was South West America! Our charity challenge took us on an adventure from the iconic Grand Canyon, through high desert, along Route 66 and finished in the spectacular city of Las Vegas! The combination of Native American culture and the glitz and glamour of Las Vegas made this trip an adventure not to be missed!

It’s now time for our fourth Unite & Bike Against Cancer experience, and this time we are heading to the stunning region of Kerala – South India’s most serene and beautiful state! This 358km adventure will see us cycle through dramatic mountain scenery, explore some of the world’s highest tea plantations and even experience breakfast on board a beautiful houseboat as we cross the serene Vembanad Lake.

If you’d like to join us on this once in a lifetime challenge, whilst supporting the cancer charity of your choice – then head over to our Unite & Bike Against Cancer Kerala page, and get signed up today!