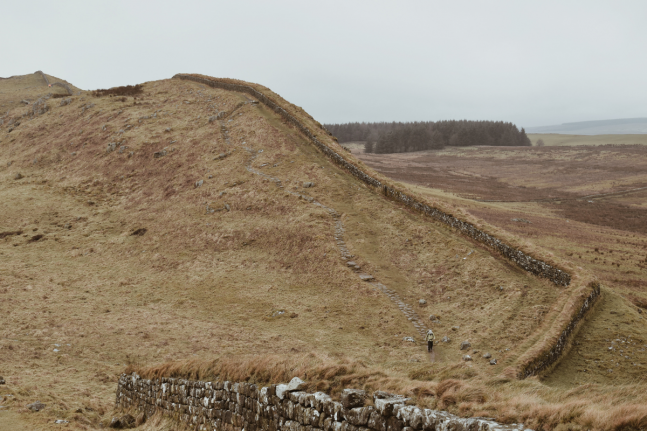 Where is Hadrian's Wall?

Everything You Need to Know About Hadrian's Wall

Hadrian’s Wall extends across Northumberland and Cumbria, and once marked the north western border of the Roman Empire. The wall stretches from Bowness on Solway, Cumbria in the east to Wallsend, Newcastle in the west. The wall once covered an impressive 73 miles and is now recognised as part of the “Frontiers of the Roman Empire” World Heritage Site.

To explore this incredible structure, why not join us on our Hadrian’s Wall Trek!

Built by the Roman army on the orders of Emperor Hadrian after his visit to Britain in 122 AD, Hadrian’s Wall is the most celebrated frontier of the Roman Empire. It was built to protect Roman England from Barbarian territories in Scotland and secure the Roman stronghold in the north of Britain allowing them to control who could pass in and out of Britain.

It was believed to have taken three legions (each of approximately 5,000 men) of infantrymen from the British army around six years to build the wall. Most of it was made of stone; however, the eastern 30-mile section at Bowness was made using turf.

Once completed, the wall was made up of 80-mile castles, 17 larger forts and a number of observation towers. At 15 feet high and between eight and ten feet wide, it was one of the largest structures ever made by the Romans.

The Life of Hadrian’s Wall

Following the death of Emperor Hadrian, the wall was temporarily abandoned when Emperor Antonius Pius re-located the frontier to the edge of the Scottish Highlands. A new wall was built in 140 AD, made up entirely of turf and named the Antonine Wall. However, by 160 AD the Romans returned to Hadrian’s Wall, restoring the damage caused by its abandonment and also adding a new road.

It’s believed that subsequent wars re-shaped the wall (damaging it in parts), as well as modifications to buildings such as the barrack blocks and Commander’s house. Later in its lifetime, the wall was used as a quarry to store stone to build castles, houses and churches nearby. It wasn’t until the mid-19th century that archaeologists began to study Hadrian’s Wall and highlight the need to preserve its remains.

In 1987 Hadrian’s Wall was named a World Heritage Site. Every year it is visited by millions of people interested in learning more about Roman architecture, history and local heritage.

There are a number of interesting sites to visit along Hadrian’s Wall, including Housesteads, with well-preserved forts and barracks and the foundations of a hospital; Vindolanda, one of the best preserved sites with onsite museum and archaeological sites as well as Birdoswald, with remains of all the Wall’s defining features.

Our Hadrian’s Wall Trek is a great way to experience the history of the wall, whilst taking part in a charity challenge! Trekking for two days along this UNESCO World Heritage Site, our Hadrian’s Wall adventure give you the chance to explore battlement scenery, learn more about the surrounding landscape and even camp overnight like the villagers who once settled there centuries ago!

Are you tempted to join us and explore this ancient Roman landmark?